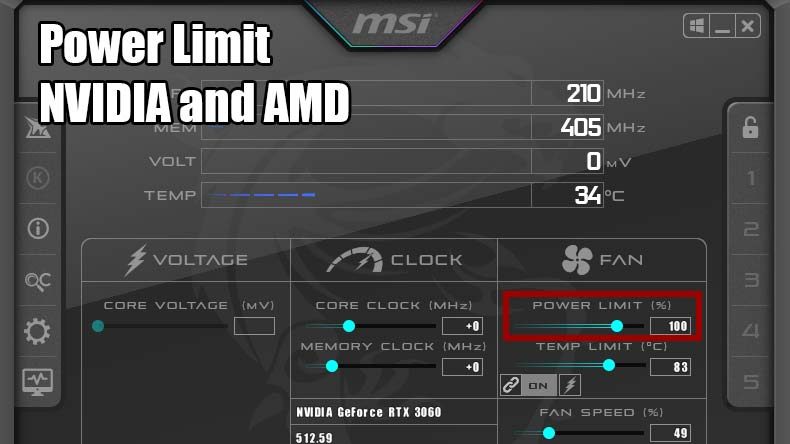 In this guide, we will show you how to power limit your GPU. Using this method, your graphics card will run cooler, quieter, and more energy efficient. The method is particularly useful for owners of the latest generation NVIDIA GPUs, such as the RTX 4090 and RTX 4080.

These graphics cards are far from efficient at their default settings and may consume more than 450 watts when fully loaded.

In any case, it is a good practice to power-limit power hungry GPUs.

MSI Afterburner power limiting is a form of GPU underclocking that simply allows the card to drop frequencies/voltages, thus dropping power consumption and losing a bit of performance (around 5-10% for RTX 4090).

To accomplish this, we will be using a piece of software called MSI Afterburner. You can set it up in a matter of seconds, and it works with Windows.

What is MSI Afterburner

MSI Afterburner is a tool for monitoring and overclocking graphics cards. The software supports  all major models from AMD and NVIDIA.

How to power limit NVIDIA and AMD GPUs with MSI Afterburner

To apply power limit to your NVIDIA or AMD graphics card do the following:

You can experiment with different power limit values and games. It is all personal preference. Check how much performance you lose and fine tune the settings.

Lets see some numbers and how much you are going to save in terms of power.

Yes, we see less FPS, but much better performance with all the other parameters.

The system is cooler, the GPU is quieter and power consumption is drastically reduced.

The second test system confirms the result of the first one – less power consumption, quieter and cooler GPU.

Is it dangerous to use MSI Afterburner power limit setting?

No, using MSI Afterburner power limit is not dangerous. In general, your GPU will reduce its clock/voltage when it reaches the target limit. Whenever you make a change, you can undo it with a click of the button.

Our suggestion is to experiment with the slider. See what combination of power limit, power consumptions, and loss of performance you can tolerate.

We think that a value between 60% and 75% will give you the best outcome in terms of power consumption to performance loss.