This article will review the differences between Dell OptiPlex 3060, 5060, and 7060 desktop computers. In case you need additional info, you can always check the technical specification on the Dell website (find the links in the tables).

If interested in buying any of these Dell models, for your kids, or to cover your home and office needs, check out our page about Dell’s best refurbished desktop computers.

Below follows a more detailed comparison between the different form factors of Dell OptiPlex 3060, 5060 and 7060.

As usual, the budget model (3060) comes with a chipset with reduced features. The other two more expensive models have the more capable chipset from Intel – Q370.

All three models have a DisplayPort, but only the 3060 comes with a stock HDMI port. Instead of an HDMI port, the other two models offer a second DisplayPort. 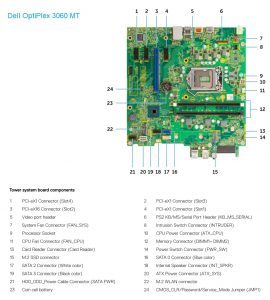 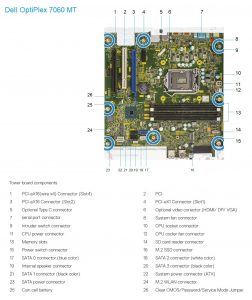 If you have an old extension card which is using a PCI slot, you will be able to use it only with the OptiPlex 7060 MT – it is the only one that has the legacy slot.

M.2 SSD slot, which supports PCIe and SATA interface, is available to all of the models. However, the OptiPlex 3060 MT slot is PICe Gen2.0 which means it will run with half the usual Gen3.0 speed.

Visually the three tower models are identical and even come with the same power supply rated at 260 Watts. Unfortunately, this power will not be enough for a dedicated GPU rated at more than 75 Watts. Changing the PSU is also not an option due to the fact that it is not a standard ATX form factor.

The only difference between 5060 and 7060 SFF is the Serial and PS2 ports that the latter comes with. On the other hand, there are a few more differences between the 3060 and 5060/7060 SFF models. The OptiPlex 3060, for example, has only 2 DIMM slots allowing for maximum of 32 GB of RAM. When sold, one of the CPU options was Intel Celeron, which was not available to the other two models. Additionally, the chipset used by the 3060 is a less capable one – Intel H370. 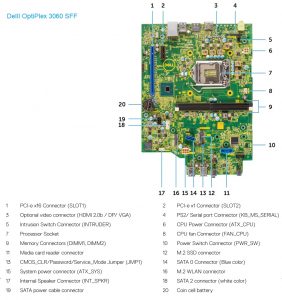 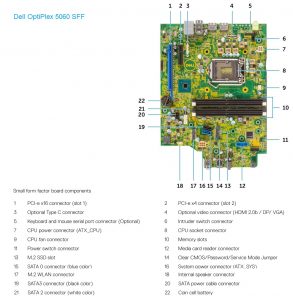 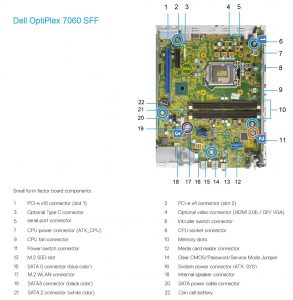 If you want the fastest SSD transfer possible, you should pick either the 5060 or 7060 models. The OptiPlex 3060 has an M.2 port which, regrettably, is running PCIe Gen2.0 instead of the faster Gen3.0.

All three models have a 200 Watts PSU which will support a dedicated GPU rated at max 30 Watts – for example the NVidia GT 1030 Low Profile.

The differences between the three Mini PC models are minor and for the 99% of the users they are irrelevant. It is important when buying one to make sure that you get all the options you will need – things like WiFi, enough RAM and appropriately powerful processor.

Just like with the bigger models, the 3060 is using Intel H370 chipset which is missing some features (like Intel vPro).

The processor options are almost identical and you can get even the OptiPlex 3060 Micro with an i7 processor. However, in case you need maximum processing power, you should pick the 7060M with a 130 Watts power supply. This allows running the PC with a 65 Watt CPU. For example, opting for an Intel Core i7-8700, and combining it with a good amount of RAM, will make this tiny PC a seriously powerful little machine.

If you plan to use 2x DisplayPort monitors, you should pick either the 5060 or 7060. The 3060 Micro has only one DisplayPort while the second is optional. However, if you have an HDMI monitor, you can take the 3060 as it is the only model that comes with a stock HDMI port. 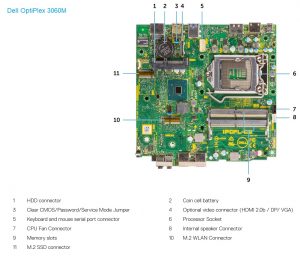 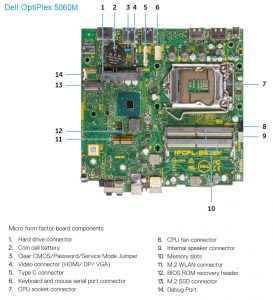 The M.2 SSD slot is a somewhat controversial topic for the Dell OptiPlex 3060 (same holds true for 3070). The slot is of the type PCIe gen2.0 x4. This means that it has half the speed of a Gen3.0 port, so if you buy something like Samsung 970 EVO NVMe SSD, you will not be able to utilize its full potential. Average speeds that people see using this SSD is around 1 GB read and 1 GB write. What is funny is that the old OptiPlex 3050 Micro, using the same Samsung 970 EVO SSD, is capable of an average 2.2 GB read and 1.7 GB write.
There are opinions on the forums that even the Dell OptiPlex 5060 is having an M.2 SSD slot which is using PCIe Gen2.0. We however, couldn’t find any prove asserting this claim. The official technical specification for 5060 states that the slot supports PCIe version 3.0, and benchmarks show the same average read and write speeds as the Dell OptiPlex 7060 (Read 1.4 GB and Write 1.8 GB). Note, that although those speeds are faster than for the 3060 model, they are still way below expectations.

You can investigate the SSD speed topic yourself by checking out these benchmarks. It gives you actual results of people running benchmarks on their OptiPlex 5060 machines. If interested in another model just change the search phrase.

Best Refurbished Mini PC for under $200

Some refurbished Mini PCs at a great price – reviewed.