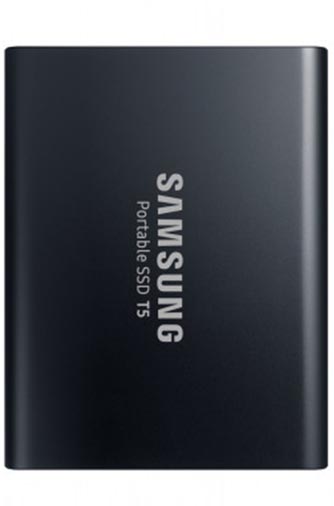 Samsung T5 is an High-End SATA SSD produced and sold by Samsung. The device comes with USB 3.2 Gen 2x1 interface and USB-C form factor - a good fit for both desktop and laptop computers. This SSD has a maximum sequential read-write speed of up to 540/480 MB per second, making it ideal for gaming and workstation PCs.

Samsung T5 is equiped with DRAM memory, and a TLC NAND flash memory with 64 cell layers.

Samsung T5 is using a TLC (3 bits per cell) NAND manufacurted by Samsung with 64 cell layers on top of each other.

Typically, SSD controllers are microprocessors. In this case we have Dual-core, 8-ch, 8-CE/ch processor responsible for controlling the SSD in such way, so that the data coming from the interface can be stored on to the NAND flash memory.

Samsung T5 has a separate DRAM chip to store the SD mapping tables. DRAM cache speeds up the data access significantly compared to the DRAM-less models.

There is no HMB architecture available on the Samsung T5 to store the mapping tables. The device either doesn't support the architecture or uses DRAM cache.